This is a radio show

A retired attorney (mostly tired and quit), Robert Gottlieb maintained a private practice in Los Angeles and San Diego for a total of 36 years.

Robert began his general practice focusing primarily on business clients, and in the 1980s began representing insurance company clients. His career as a lawyer provides the backdrop of experience against which he has painted with a broad stroke the disillusionment and exhaustion that haunt the majority of attorneys practicing today.

Born in Los Angeles, Robert lived most of his early life in the San Fernando Valley. He attended public school and graduated from law school in Los Angeles.

Early in his days as a practicing attorney, Robert began making and saving notes involving situations with clients, prospective clients, courtroom proceedings, and the humorous and often absurd stories related to him by other attorneys. It didn’t take long to realize that the practice of law, like any other business, is about people much more than about the law itself.

In the mid- to late 1990s, Robert began to create narratives from hi notes. No Nude Swimming is his first novel.

The main character in his novel is attorney Sam Weisman. His wife wants a divorce, and his law practice is threatened by a hostile takeover. Pulled one way by two hilarious con artists who plan to steal his dreams, and another by his family and the real estate professional who's worked her way into his heart, Sam struggles to hold onto his sanity, his self-esteem, and the woman he loves. Grasping the end of his rope in one hand and the end of his rainbow in the other, he teeters between the abyss ... and the pot of gold!

Visit the website at http://www.nonudeswimming.com to make a purchase 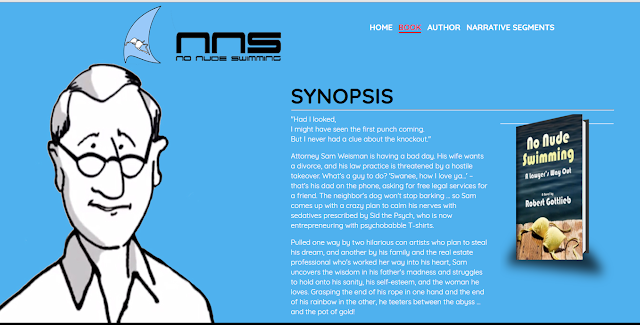