Psychiatrists Have Taken 170 Years to Apologize for History of Racism 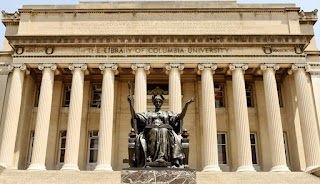 The Racism of Former American Psychiatric Association President Jeffrey Lieberman, Chair of the Columbia University Department of Psychiatry, has caused him to resign. His tweet about Model Nyakim Gatwech has drawn international condemnation and demands of his resignation - https://www.cchrint.org/2022/02/25/psychiatrists-racist-tweet-about-model-nyakim-gatwech/ 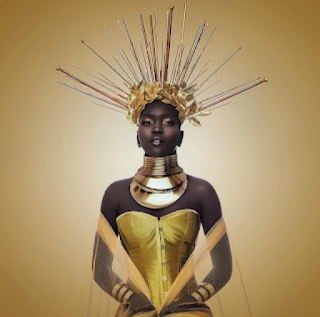 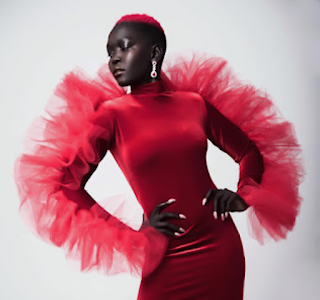 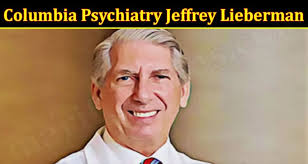 • Lieberman has a controversial past, including being irrationally critical of anyone opposing his or psychiatry’s works—making accusations of the type that are now being similarly directed at him, but with merit.

• The Columbia Vagelos College of Physicians & Surgeons wrote to leaders at four institutions affiliated with Lieberman questioning if New York Presbyterian Hospital is safe for students and patients of color.

• Rev. Shaw states, “As an African American and human rights advocate, I am appalled that Ms. Gatwech was subject to this racial abuse,” Rev. Shaw calls for Lieberman’s resignation from all executive and advisory positions he holds internationally, including with pharmaceutical companies. 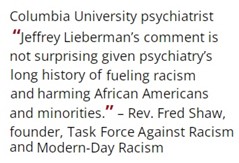 Former American Psychiatric Association president Jeffrey Lieberman, Chair of the Columbia University Department of Psychiatry, has been suspended after issuing a racist post on his Twitter account about a dark-skinned model, Ms. Nyakim Gatwech. 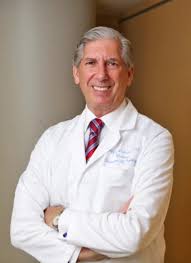 He was subsequently removed from his position as psychiatrist-in-chief at Columbia University Irving Medical Center/New York-Presbyterian Hospital and forced to resigned from his role as executive director of the New York State Psychiatric Institute.[1] However, Rev. Frederick Shaw, president of the National Association for the Advancement of Colored People Inglewood South Bay branch and founder of the Task Force Against Racism and Modern-Day Eugenics, said Lieberman’s subsequent trite apology to Ms. Gatwech, was grossly inadequate for someone of his stature in psychiatry.

“Jeffrey Lieberman’s apology to the model, Ms. Nyakim Gatwech, was trite and grossly inadequate for someone of his stature in psychiatry. As an African American and human rights advocate, I am appalled that Ms. Gatwech was subject to this racial abuse.” – Rev. Frederick Shaw, founder of CCHR’s Task Force Against Racism and Modern-Day Eugenics

“As an African American and human rights advocate, I am appalled that Ms. Gatwech was subject to this racial abuse,” Rev. Shaw said. 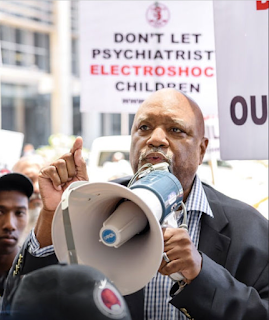 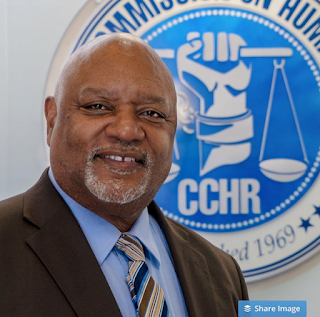 He called for Lieberman’s resignation from all executive and advisory positions he holds internationally, including with pharmaceutical companies—from the U.S. to Spain.

Lieberman tweeted in response to a photo of Ms. Gatwech, an American model of South Sudanese descent, that her skin color was possibly a “freak of nature.” 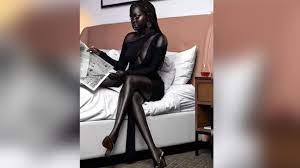 In an email to his colleagues before he was suspended, Lieberman apologized for the tweet, describing it as “racist and sexist.” He added that he was “deeply ashamed” of his “prejudices and stereotypical assumptions.”[2] 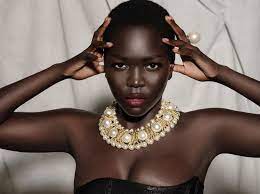 But Rev Shaw said the apology was “public relations rhetoric. This is no light-weight psychiatrist, he’s the former head of the American Psychiatric Association, and has been a researcher for the National Institute of Mental Health and served on its National Advisory Mental Health Council; he also served on the advisory board of the Food and Drug Administration advisory committee for Neuropharmacologic and Psychopharmacologic Drugs and has been on the editorial boards of numerous journals. We shall approach all of them to have Dr. Lieberman be removed as an expert and denied future official affiliations.”[3] 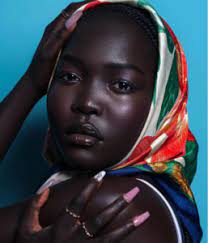 The New York state Office of Mental Health, which operates the New York State Psychiatric Institute, asked Lieberman to resign as director, stating: “The Office of Mental Health took immediate action after learning of Dr. Lieberman’s offensive and inappropriate comments on social media. As of February 22, he is no longer affiliated with OMH or the State of New York,” said agency spokesperson Jessica Zahn.[4]

The government-funded position with the New York State Psychiatric Institute paid Lieberman almost $250,000 annually in 2020 and 2021, according to payroll records.[5]

“To not understand how racist language like that is harmful when your profession is supposed to care for the mental health of people makes you unqualified to be a psychiatrist at all, let alone the chief of the top program.” – Dr. Elle Lett, a postdoctoral fellow in medicine at the University of Pennsylvania[6]

“This man held the sentiments that shaped the department. This is a reckoning for institutional change,” Lett told THE CITY. “I don’t trust him or the people he trained of being stewards of mental health to Black women.[7]

In April 2021, the APA issued a formal apology over what it called psychiatry’s “role in perpetrating structural racism” and “history of actions…that hurt Black, Indigenous, and People of Color” (BIPOC).[8] It took them over 170 years to apologize, which the Task Force rejected.  APA’s response to Lieberman’s comment was unremarkable and self-serving. Its Board of Trustees issued a statement, saying it “reiterates its position that both racism and sexism harm the APA as an organization, the field of psychiatry, and the people and communities we serve. Past APA presidents do not speak for, or on behalf of, the APA.”[9] 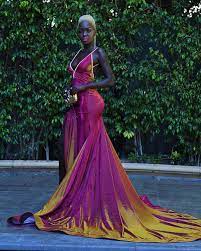 Rev. Shaw says the APA needs to take a much stronger stand—removing Lieberman’s past presidential title and issuing other sanctions.

Lieberman’s post, with a photo of Ms. Gatwech, was not only racist but also sexist. “It is not a work of art made of black stone or granite,” read the original tweet, published by a user with the handle @zg4ever. Further, he wrote that Gatwech “is in the Guinness Book of World Records for the darkest skin on Earth. But in 2020, Guinness tweeted and clarified that it does not monitor skin tone.” [10] 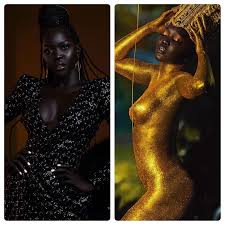 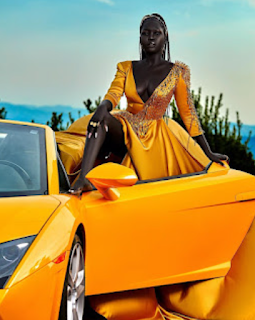 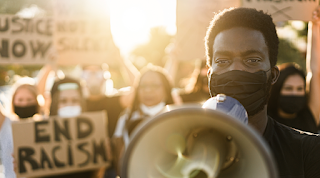 Shaw rejected explanations for Lieberman’s behavior, including Robert Klitzman, a professor of psychiatry at Columbia, who described the episode as “unfortunate” and said it “really highlights how deep and pervasive some of our own unconscious biases can be.”[15] “I don’t believe this was some ‘unconscious’ bias,” Shaw said. “You could never excuse slave owners’ brutality by saying they were ‘unconsciously’ indoctrinated in the fraudulent idea that Africans were genetically inferior to white humans, justifying their enslavement.”

Comments from others include:

Lieberman’s Past Comments: “self-promotional and condescending” ….

Lieberman has a controversial past, including being irrationally critical of anyone opposing his or psychiatry’s works—making accusations of the type that are now being similarly directed at him, but with merit.

One former trainee of Lieberman told THE CITY in the wake of his current racist comments that no one was “surprised” by his remarks:

“Everyone had a very low opinion of him [Lieberman] but no one says or does anything about it.” He was very powerful, that “If you write a grant, he has to write the letter of support.” – Former trainee of Lieberman[27]

Rev. Shaw adds: “This is the character of the man who now—in response to his racist comments said: ‘An apology from me to the Black community, to women, and to all of you is not enough. I’ve hurt many, and I am beginning to understand the work ahead to make needed personal changes and over time to regain your trust.’”[28]

Rev. Shaw called the apology self-serving and reiterated that Lieberman should be denounced internationally and any pharmaceutical company affiliations should remove him as a speaker, consultant, advisory board member or researcher. In December 2020, a clinical-stage biopharmaceutical company in Spain, announced collaboration with Lieberman and other researchers from Columbia University that the Task Force will seek revocation of the relationship.[29]

Rev. Shaw’s Task Force will write to government agencies and private companies and organizations to ask them to remove Lieberman as one of their experts and will also contact psychiatric agencies or groups planning on having him as a speaker.[30]

The Task Force Against Racism and Modern-Day Eugenics comprises over 100 African American community members that want to see racism eliminated from the mental health field and greater accountability instituted in the psychiatric industry for racist and harmful treatment of minorities.

[3] “Interview: In search of the pathophysiology and prevention of schizophrenia,”

[11] https://www.cchrint.org/2021/01/26/american-psychiatric-associations-apology-for-harming-african-americans-rejected/, citing: Prof. Thomas Szasz, M.D., The Manufacture of Madness: A Comparative Study of the Inquisition and the Mental Health Movement, Jan. 1970, p. 154